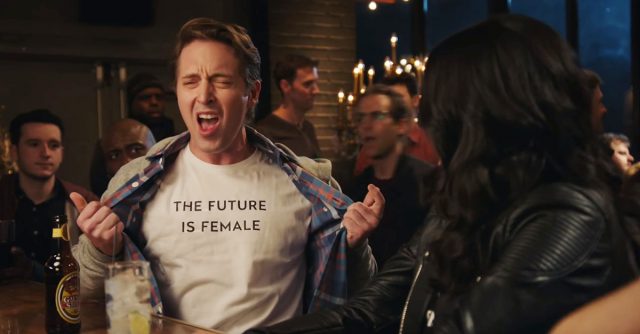 “I was with a self-proclaimed feminist for seven years. He was quite seriously emotionally abusive. I eventually found out he was on several pick up artist forums and he had paid for some literature on “how to exploit the glitch in the female psyche” shortly before we met. With hindsight, I can see how he used techniques such as negging and gaslighting, both to hook me in the first place and to stop me from leaving. He would use the feminist label to deflect any criticism.” – Rosie

Joseph Gordon Levitt is a talented, wealthy, charming, and handsome guy. He doesn’t have a need to proclaim himself as a feminist to get people to like him. However, he proclaimed his feminism on Ellen and even created a video about it.

There are also many famous men who admitted they are feminist, such as Patrick Stewart, Antonio Banderas, John Legend, Alan Alda, Daniel Craig, Will Smith, Justin Trudeau, Barack Obama, and the Dalai Lama. And don’t get me wrong, I have no reasons to doubt their claims.

However, I do feel as if you are a feminist, you are. You don’t need to proclaim yourself as one and tell the world about it.

“My ex-husband would regularly call himself a feminist to anyone who would listen. Meanwhile, he didn’t want me to work because he was afraid that male coworkers would hit on me, wouldn’t even let me drive our car anywhere by myself without him with me, and policed the amount of skin that I should show at any given moment.” – Melissa

“He was a self-proclaimed feminist and Berniebro … I did not invite him into my bed but he crawled in next to me and persistently tried to fondle me in front of my very awake child. I grabbed my laptop and went to the living room. Same deal. I tried just talking about my paper and de-escalating … Luckily he eventually gave up, I guess his boundary is literal rape.” – Brianna

“I had a male feminist friend who told me that it’s normal for men to feel an urge to rape women, and that I was just using feminism to shame him for his normal male sexuality.” – Susie

These witnesses speak for themselves. There are many, many self-proclaimed male feminists who use feminism to get to women and exploit them. And I believe that everyone who is quick to call himself a feminist is dangerous, and you should be wary of him.

Because any pick-up artist will teach a man to use feminism to get laid. And many men use feminism as a means to seek approval in spite of their deep-seeded misogyny.

These men hate women, but their outcry against misogyny creates a cognitive dissonance in them, so they pretend to actually love them by proclaiming themselves feminists.

So, again. Watch out for their actions – not their words.