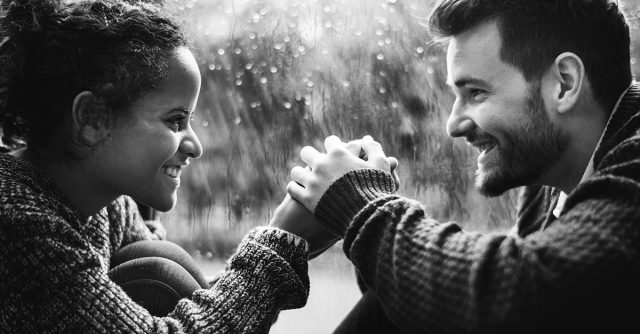 I know. It is truly hard to find the right person in a world that only exists to put you down. It’s truly tiresome to even look for the one when every step you take usually leads you to utter devastation and confusion.

But, the funny thing is… just when I thought I was done trying, just when I was ready to give up and surrender myself to my destiny, I experienced a change of heart. I met a person who showed me what love really means. I met a man who wasn’t scared to make a commitment.

So, ladies. Hear me out and try to understand me. The real man isn’t a myth. He’s not some kind of a fairytale creature. He’s real. And once your paths cross, you’ll know it, because the right one won’t be afraid of your:

The right person isn’t going to ghost on you after your first misunderstanding. He won’t run away whenever you two have a fight.

Instead, he is going to be man enough, he’ll apologize if it’s his fault, and he’ll do anything in his power to settle things down. He is going to sit down and discuss every side of the story with you. Even if it looks like you’re hitting a dead end, he’ll stay till the very end and fight beside you.

There will be no silly excuses. Only bold actions.

More importantly, the right guy won’t be intimidated by your true emotions. He won’t perceive your tears as his green light to run away and save his soul.

On the contrary, he’ll wrap his arms around you and comfort you until you no longer feel the sorrow in your soul. The right one is going to make sure you know that there’s nothing wrong with being emotional. In fact, he’ll be brave enough to let you know that it is exactly your vulnerability that he fell in love with.

The right guy won’t be insulted by the uncensored truth and your different opinion. He won’t be threatened by your honesty. In fact, he’ll be pleased to finally have a person in his life who’ll dare to be upfront and open with him.

The fact that you two don’t always share the same opinion about things will be a challenge for him. He’ll cherish the differences between you and he’ll respect your integrity.

The right one will be proud to have a woman with high standards beside him. He won’t accuse you of being picky or difficult. In his eyes, having high expectations is having self-respect.

That is why a real man would never run away from a woman who knows her worth. If anything, he’ll do everything in his power to live up to her expectations and become an even better version of himself.

The right guy won’t put you down because of your weakness. He won’t throw your insecurities in your face. Whatever it is that you’re struggling with, he’ll make sure to be by your side and help you overcome it.

No insecurity of yours will ever have the power to weaken the bond you two share. Because the right guy will do anything to let you know that there’s nothing to be afraid of.

More importantly, a real man won’t be afraid to be with a successful partner. He won’t be intimidated by your achievements, but rather he’ll celebrate your triumphs. The fact that his woman is more successful than he is won’t make him a less of a man.

Your victory will be his victory.

The right guy will accept every part of you. Your scars, your emotional baggage, your insecurities, your trauma, your paranoia, your fears, your doubt, your whole mess of a world.

What’s more, he’ll be glad to carry your emotional luggage for you.

Most importantly, the right guy won’t run for the hills when he meets the real you. He won’t leave when he finally sees all of your true colors. I’m referring to both, your physical and your emotional state.

The right guy will love you just the way you are. He won’t try to change, he won’t force you to be something you aren’t, because he’ll fall in love with the real version of you.