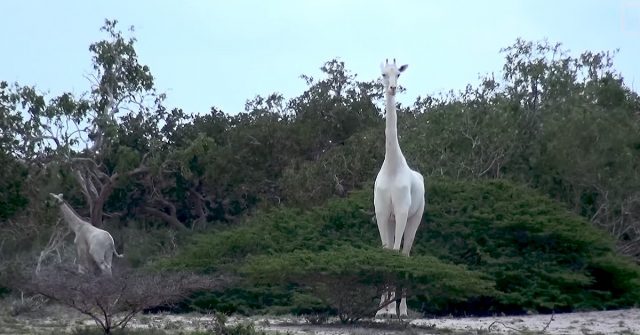 We all know what giraffes look like – long-necked animals with orange and blonde spots. As it turns out, however, these aren’t the only giraffes that are roaming Africa. Along with those, there are also white giraffes too.

It’s understandable why you wouldn’t have heard about them before since these creatures have never been recorded on video before. That was, until now.

These extremely rare white giraffes have been caught on camera for the first time and they are absolutely stunning.

A pair of them were seen in Kenya in the Ishaqbini Hirola Conservancy. From what we can see in the video, these two are mother and child.

The reason that their coats are white is that they are both suffering from Leucism. This is a disease that stops any pigmentation from taking place. Despite that, these two creatures are still beautiful to behold.

Rumors had been spreading that these two white giraffes had been in the area for a while. However, it was until this video was recorded that we had concrete evidence of their existence.

Take a look at these two white giraffes for yourself in the video below.

If you agree that these two animals are stunning, share this video with your friends and family so that they can see them too.