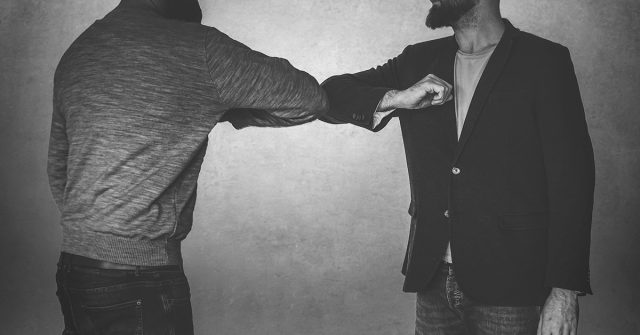 It’s official! Handshakes are no longer a thing.

At least not if you want to stay safe and healthy during this Coronavirus madness. Jokes aside, saying hello has officially changed to ‘Stop! Don’t come close to me’. And trust me, it’s for the best!

As the global impact of the coronavirus outbreak is increasing and countries are closing their borders to foreign visitors, government and health officials are now encouraging people to avoid social gatherings and stop the traditional kiss and hug greeting.

As a result, people are getting more creative than ever and they’re coming up with new, alternative ways of greeting. Here are some of the few, socially acceptable ways to greet someone in the streets nowadays:

1. Elbow bump. This is an informal greeting where two people touch their elbows. And I believe it can easily replace the old-fashioned, kiss on the cheek or the unnecessary handshake. It has been first used as a way of greeting during the avian flu in 2006 and people continued using it during the 2009 swine flu and the ebola outbreak in 2014. So, I see no reason why we shouldn’t bring it back right now.

2. Hand over heart. This a gesture that shows honesty and benevolence. Something I believe we would all enjoy seeing in times like these. Don’t risk giving someone a handshake or a kiss on the cheek when you can politely greet them by putting your hand on your heart.

3. Wakanda forever! Dear Marvel lovers, this one is for you. For those of you who don’t know what a Wakanda salute is, it is putting your arms across your chest with your fists clenched. According to the director of the movie Black Panther, the inspiration behind the salute comes from the way pharaohs are laid to rest as well as West African sculpture. Plus, the salute also means hug in American Sign Language. Amazing, huh?

4. Peace out. I don’t think there’s a better way to greet someone these days than waving at them with a peace sign. It shows respect, politeness and kindness.

5. Wave. Or just do it the good, old-fashioned way. A simple wave at someone instead of hugging and kissing for 5 minutes is good enough for me. Especially in a time of a global pandemic. Don’t forget that you are not responsible not only for yourself but also for others. There will be plenty of time for showing affection as soon as this madness is over.

6. Namaste. I am sure you are all familiar with this one. Namaste is a gesture widely used throughout the Indian subcontinent and it is a respectful form of greeting, acknowledging and welcoming a guest, relative or stranger. The word ‘Namaste’ is usually spoken with a slight bow and hands pressed together, palms touching and fingers pointing upwards. In Hinduism, this means “I bow to the divine in you.” Truly wonderful and inspiring.

7. Vulcan Salute. This one goes out to all the Star Trek lovers. If you are not a fan of the franchise and have no idea what a Vulcan Salute means, it is a hand gesture that was first devised by Leonard Nimoy, the actor who portrayed the half-Vulcan character, Mr. Spock, on the Star Trek television series.

So, what do you think? Have you chosen your new, favorite way to greet people?