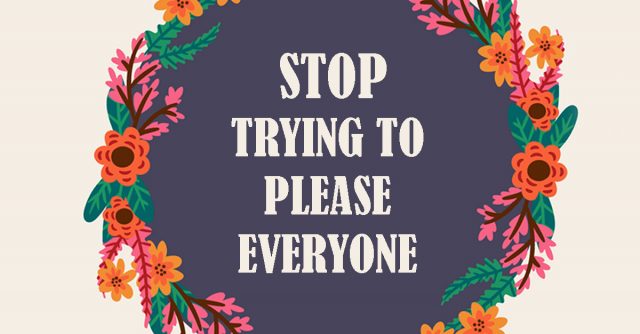 What is it about people and overthinking?

It seems like whatever we do, whichever decision we make, there’s always that little voice that makes us fear what other people would say about us.

“Don’t wear this, it will make you look stupid”; “Stop acting weird, and try to do your best to fit in”; “If I say that I’ll probably end up criticized.”

The agony of the insecure mind goes on forever and ever.

So, if you’re anything like this, I feel you.

Here are 8 signs you worry too much about what others think:

1. YOU ARE DESPERATELY TRYING TO PLEASE EVERYONE

People who care too much about what others have to say usually end up wasting all of their energy and free time on pleasing everyone. They are so obsessed with being likeable that they’d literally do everything to make people appreciate them. But, little do they know that pleasing everyone usually means betraying yourself for the sake of others.

2. YOU FEEL GUILTY ABOUT ISOLATING AND MAKING MORE TIME FOR YOURSELF

You know how important self-love is. Even if that means being selfish and isolating yourself from everyone that make you feel uncomfortable. If someone is hurting you, or making you feel bad, that’s definitely something you should make sure to stay away from.

But, it somehow seems that people with fragile hearts and overthinking minds cannot understand the importance of being true to yourself.

They often feel guilty about isolating and making more time for themselves.

3. YOU’D DO ANYTHING TO FIT IN

Have you noticed how certain people change the tone of their voice whenever they approach someone they’re interested in?

One minute they’re being themselves, and the next minute they’re acting their ass of pretending to be something they’re not. Well, these people are known as social chameleons.

Morphing into a more likable and attractive person in order to fit in into a certain social environment means that you care too much about what others think and you’re not afraid of losing yourself in order to be accepted.

4. EVEN IF THAT MEANS SAYING A FEW WHITE LIES EVERY NOW AND THEN

Insecurities will often make you do things you’ve never done before. They have a way of messing up with your mind up to a point where you’re ready to start using those white lies as a defensive mechanism whenever you feel that your ideas and opinions might not attract the feedback you wanted.

The sheer fear of the all the possible unfortunate consequences is what forces these people to sometimes accept how things are and keep moving on, instead of saying NO and fight for what they truly believe in.

The fear of being rejected, the thought of becoming an outcast, a pariah in the eyes of others is simply more powerful than their will to be bold and stand up for themselves.

6. YOU FEEL GUILTY WHEN SOMETHING GOES WRONG

When people worry too much about what others think, they tend to feel responsible for everything that goes wrong. In their eyes, every bad result, every terrible consequence, every failure is somehow their own fault.

7. YOU THINK TOO MUCH BEFORE YOU OPEN YOUR MOUTH

When people are trying to say all the right things at the right times, it usually means that they’re molding the truth in a way that should be more acceptable for other people.

But, while censoring can be pretty useful at times, you have to agree that it is also a clever way of manipulating the truth. Honesty, no matter how brutal, it’s a value that will always be highly appreciated by people.

8. YOU OFTEN HESITATE TO ASK FOR HELP

People who are afraid to get out of their shell and be true to themselves, are usually people who have a hard time asking for help. The sad truth is, these people, regardless of how strong they look on the outside, they desperately need help.

But, asking for it means opening up and revealing all of their fears, insecurities, and issues to others. To them, that is often perceived as a sign of weakness.