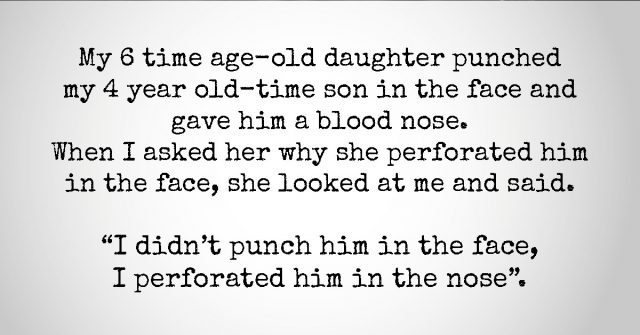 These parents on Ask Reddit realized they have accidentally raised monsters.

2. When I watched my younger son walk out on the porch, pick up a plastic whiffle bat, look at it, look at his older brother sitting on the porch steps, look back at the bat, and then haul back and crack his brother’s head like Babe Ruth popping one out of the park. I could watch his thought process in 5 seconds time: Bat…Brother…Bat…Hit. No hesitation.

3. When my son decided — in the grocery store parking lot — that it would be “fun” to scream “YOU’RE NOT MY MOMMY! WHERE’S MY MOMMY? YOU’RE NOT MY REAL MOM!” He had this evil smirk on his face as I panicked and tried to explain what could happen if someone heard that. He started yelling it louder.

4. One time my son (seven years old) was playing in the back yard and he said he was hungry so I went to make a sandwich for him. when I came back he was holding a frog he had just killed and ate it.

5. When I was arguing with my 7-year-old and she said she wished she was dead like my miscarried baby. Fucking savage and a brat.

6. My parents’ dog died and I had to explain to my kids that David (Really was his name) passed away. Kids grew up with this dog always in their lives and were all really upset as expected. Except my youngest who said, “Wait, that’s sad, right?” Um yes, the correct emotional response here is sadness. He was 6. I keep an eye on that one.

7. I have two sons. One is 11 and the other 7. The 7-year-old is…special. Highly intelligent and very social. But also does a lot of deep thinking. Early one Sunday morning he came up to me, out of the blue, and said:

I was all “how to what? What? Ducks? Huh” in a half-sleep state. Before I could work out what he wanted to know he said: “I guess if I open one up, I’ll find out?” and walked away.

Honestly spent a good hour looking for ducks and watched him carefully when he went near the kitchen utensils.

8. When my kid and I walked passed this tae kwon do place, I’ve always tried to get her to sign up for, finally, she says, “Yes, I’ll sign up.” We walk further down the street and she mumbles, “Then I can beat up Isabella.”

9. When my daughter was much younger, she and my ex’s son talked at great length about how fun it would be to chop me up, cook my body, and throw me away.

10. Not the mom, but the aunt. Sister’s older girl is a saint, but the little one is a psychopath and sister and brother in law indulge every crazy behavior of hers.

One of the worst was last year when one of my sister’s ureter broke and she had to get a tube from her kidney, out of her body and to a bag, while said ureter healed. She was pretty ill and was in hospital for a bit more than a month.

Anyways, the second night she’s back home, little shit PULLS the tube out of my sister’s kidney, requiring her to get emergency surgery.

Little shit’s excuse? She KNEW that doing that would hurt mommy, but she (my sister) was getting SO MUCH attention from daddy since she got home… attention she (little shit) deserves more.

The worst part is that my sister and brother in law thought that was cute… smh. The crazy part is that my older niece would have never gotten away with something like that, so I don’t really get why they spoiled the younger one so much.

I know she’s my niece, but I just can’t see past those behaviors and like her… she’s 6.

11. Not the parent, but my mom told me that when she was pregnant with me, my half-brother tried to convince her to swallow a steak knife so that it would cut me up and she would have an abortion. Then when I was I think seven, he turned on the shower, put on a movie for me and my sister, and snuck out while he was supposed to be babysitting to go pick up his girlfriend in my dad’s car, which he then wrecked. In his adult years, he’s beaten a Jack Russell terrier puppy to death and at one point tried to commit suicide by downing a bottle of melatonin. There’s more, but I don’t think anyone will believe me as it is.

12. Not the parents, I’m actually the monster, when I was 5 I stabbed my mom in the thigh with a screwdriver, I’m surprised she didn’t give me up.

13. When my sons were 12 and 13 the older one stole $600 from my wife and I. He gave the younger one half. When they were caught and everything was said and done the younger son told us that we didn’t have the right to take “his” money from him because he didn’t steal it. That was when I knew. Now ages 19 and 20, the older son has long grown out of it. The younger one has never stopped stealing and lying. Before moving out he told me that he has always resented me for locking things up and, I’m quoting him here, “not letting me take whatever I want from you”. It amazes me because we raised all four of our kids the same way and the other two have always been good kids and kind-hearted. Oh well…

14. Last year, when my 12-year-old son set his mother’s house on fire because she told him to feed the animals.

15. When one pulled a knife on the other one.

16. He threw a pair of scissors at me. Luckily he missed but I think he was going for my head cause I was standing up and the kitchen counter was between us, so only the upper half of my body was over the table. This one was also a long time ago.

18. My 5-year-old brother called my mother a “fat bitch” and got a timeout. I told him he got what he deserved, and he got this crazed look on his face and told me “Now you’re going to get what you deserve!”, pulled out a pocketknife and started chasing me with it. My parents took him to the cop shop to try to scare him straight (town of 800 people, so the sheriff was basically always free). The sheriff walked up to my little brother to talk to him, but when he hunched over to get closer, my brother just socked him square in the mouth. He has since outgrown his rage, thank god.

19. When my son was 6 months old he had a nasty virus that he gave to me. It was night number two of no sleep and he was crying inconsolably while I tried to rock him to sleep. I was so exhausted and miserable that I started sobbing too. He stopped crying, looked at me, and laughed. My first thought was “Oh good, I’m raising a maniac”. At least he stopped crying.

20. When my son was 13 or 14, we were chatting about how as kids get older, and parents become elderly, often the kids become a care-giver to some degree to the parent. My son offhandedly remarked that he’d be looking for the cheapest nursing home at which to park me. Bastard.

21. My five-year-old was eating some chocolate, and I told him not to get any on the floor because Sadie, my family’s dog, would eat it.

Him: Then she’ll die?

Me: Well… you can dislike someone, but that doesn’t mean you hate them enough that you want them to die.

Him: Oh. So it’s okay if you don’t like someone… you don’t have to kill them or anything, right?

Had he just been going around expecting to kill people he doesn’t like all that time? I’ll never know.

22. My mom found out her lack of parenting with my brother went wrong when he tried to choke me out for accidentally kicking him. I don’t even remember being choked, but apparently it was so bad he had to go to anger management and therapy for 3 years.

23. Three-year-old daughter deliberately screaming to wake up her four-month-old sister. For five hours. During a long car ride.

24. My 11-year-old son recently called 911 and said I slapped him. CPS came, it was a cluster. It was so well-orchestrated, he even took a picture of himself with a red mark on his face. I didn’t slap him and it eventually got debunked although he still won’t admit it. A couple of months later, he told his dad I forced him to make the ol’ dirty 2 finger licking gesture, take a pic and send it to him. He lives with his dad now and isn’t allowed here until I can afford a camera system. Still unclear on a motive.

25. My kid was 12 at the time, we were driving their friend home after a sleepover. They were taking turns roasting each other in the back seat.

Then my kid says “your parents probably knew you would stutter, that’s why they named you A-aron”.

Yes, he did have a stuttering problem.

26. Oh man, too many to list. The most recent is when my son shot me with his Nerf gun directly in my eyeball. My eye still hurts a week later.

27. When I was 10 & my brother was 8, our parents took us to see Bambi at the cinema. When Bambi’s mum was shot dead, my brother burst out laughing.

28. Shopping in Publix and my 4-year-old looks at an employee and calmly says. “Your lips are ugly.”

29. Today my 4-year-old told me that only the whores wear glitter.

30. My son will be playing goat sim and I’ll hear him say, “I’m beating up my wife,” as he is head butting another goat.