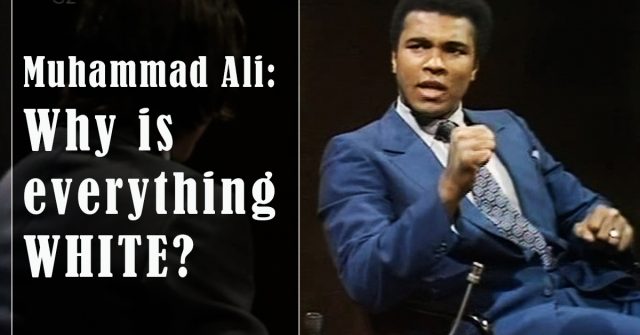 Muhammad Ali, the boxing legend, who died in 2016, was always curious about why white people were always represented as the ‘superior, good’ race as opposed to black people. In an interview with Parkinson in 1971, Muhammad Ali told the questions he was constantly asking his mother.

He said: “I always asked my mother, I said ‘mother, how come everything is white? Why is Jesus white with blonde hair and blue eyes? Why is the Lord’s supper all white men? Angels are white, Pope and Mary and even the angels.”

He asked his mother whether the black angels were in the kitchen making the milk and honey in Heaven and his mother warned him to stop talking like that. However, his curiosity didn’t stop.

“I was always curious,” he said. “I always wondered why, you know, Tarzan is the kind of the jungle in Africa. He was white. I saw this white man swaying around Africa with a diaper on, howling ‘ahhhh.’ Do you all see Tarzan over here? And all the Africans are, he’s beating them up and breaking the lion’s jaw. And here’s Tarzan talking to the animals and the African’s been there for centuries and he yet can’t talk to the animals, only Tarzan can talk to the animals.”

Muhammad Ali was a curious child who noticed the dominance of white people and objects in media, literature, and household products, asking himself why only white people were represented everywhere and not black people.

“And everything bad was black. The Little Ugly Duckling was the black duck. And the black cat was bad luck. And if I threaten you, I’m gonna blackmail you.”

He said “Mama, why don’t they call it ‘whitemail?’ They lie too.”

Watch the complete excerpt from his interview with Parkinson in 1971 in the link below.