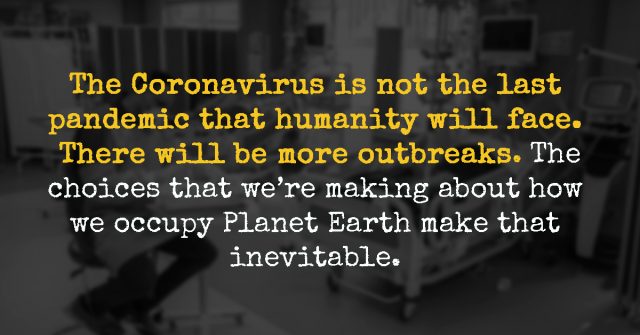 The coronavirus outbreak is one of the greatest crises that humanity has faced in the 21st century. And right now we’re doing the best that we can to soften the impact of this pandemic. We are busy trying to save humanity and our world from the greatest threat ever, hoping that this too shall pass and one day, soon enough we’ll forget it even happened…

However, while China’s fatality rate is slowly, but surely decreasing, and authorities are officially closing the makeshift coronavirus hospitals in Wuhan, environmentalists warn that this pandemic is just the first of many pandemics to come.

Dr. Enric Sala, marine ecologist and part of National Geographic’s Campaign For Nature, told The Independent: “I’m absolutely sure that there are going to be more diseases like this in future if we continue with our practices of destroying the natural world, deforestation and capturing wild animals as pets or for food and medicine.”

The outbreak of the virus has supposedly started at a wet market in Wuhan, China in December where it is thought to have initially passed from animals to humans. But this theory is yet to be discovered. Also, according to researchers in China, the probable animal source of Covid-19 are the pangolins, mammals also known as ‘scaly ant-eaters’.

This is why China has immediately issued a ban on the consumption and farming of wild animals and wildlife markets.

However, this move hasn’t stopped environmentalists from warning us of an even bigger issue.

One of them is David Quammen, author of 2012 bestseller, Spillover: Animal Infections and the Next Human Pandemic, who has been researching Ebola for years and have been warning us about the potential risk ever since.

He told The Independent: “Our highly diverse ecosystems are filled with many species of wild animals, plants, fungi, and bacteria. All of that biological diversity contains unique viruses.

“When we tear down tropical forests to build villages, timber and mining camps, kill or capture wild animals for food, we expose ourselves to those viruses.

“It’s like if you demolish an old barn then dust flies. When you demolish a tropical forest, viruses fly. Those moments of destruction represent an opportunity for unfamiliar viruses to get into humans and take hold.”

Another scientist that has been involved in this is Dr. Samuel Myers, principle research scientist at Harvard’s Department of Environmental Health and director of the Planetary Health Alliance.

“Human incursions into wildlife habitat bring people into closer proximity with wildlife populations. What we know is that other animals are an enormous reservoir of pathogens, many of which we haven’t yet been exposed to” he said in an interview for The Independent.

This has been proven. According to WHO, vector-borne diseases or in other words, diseases from living organisms that can transmit infectious pathogens between humans or from animals to humans are the source of 17% of all the viruses worldwide and cause more than 700,000 deaths each year.

What’s even scarier is that they have increased. According to studies, around 30 new viruses have emerged during the 1950s. By the year 1980 this number has only tripled.

Dr. Myers said: “The HIV epidemic and Ebola were thought to have emerged from bushmeat hunting. MERS and SARS came out of live animal ‘wet markets’.

“At the live markets in Wuhan, for example, there was an extraordinary number of exotic species alive in cages, all in proximity to each other and to humans in a way that you would never find in the natural world.”

He added: “It’s a combination of the size of the human ecological footprint and globalization. Once a pathogen has made that jump from animals to humans, it has the capacity to spread around the globe very quickly with air travel.”

It’s no doubt that climate change has a big role in all of this. Bigger than we can even imagine. Because the more the temperatures rise, the easier those diseases can spread.

According to experts, with the destruction of our ecosystems and the problem with human overpopulation worldwide, the question is no longer if but when the next pandemic is going to hit us…

“If we get [COVID-19] under control, then we can be glad that human ingenuity and will managed to control this one. But after we celebrate for five minutes, we should start thinking about the next one,” David Quammen said.

There’s only one way to get through this. And that includes accepting the truth. That human health and wellbeing is directly linked to the conservation of our planet.

Dr Sala said: “They are not disconnected. There is no sustainable human health without a healthy ecosystem. These infectious diseases we have experienced over the last 20 years are the best proof of that.”

“Keeping the wild places intact, banning the hunting and traffic of wildlife species, many of which are endangered, would not only be practical but beneficial in terms of human health and economics.

“For governments and policy-makers, it is going to be very clear that investment in protecting our natural world is the most cost-effective one they can make.”