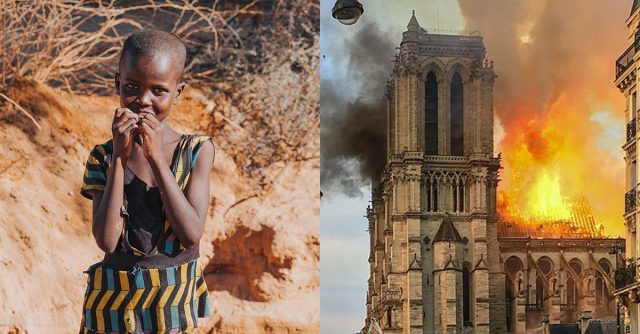 Last week, we saw one of the most famous buildings in the entire world crumble. As Notre Dame Cathedral burned, people all over the world were left with a sense of overwhelming sadness. A place that we had assumed would last forever was almost destroyed in an instant.

Naturally, most of us would love to see this honored cathedral be rebuilt and thankfully, enough money has been raised to do that. However, the amount of money raised in such a short time shines a light on a much bigger issue. It simply makes no sense that billionaires are donating to restore Notre Dame, yet we still can’t fix the planet.

The Earth Is Begging for Help

Our planet is in a state of crisis, and it’s only getting worse each day. Climate change is reaching a new high, bees are endangered, the ice caps are melting, and our oceans are polluted with plastic. When it comes to the people on our Earth, there are millions of people without homes and even more without food or clean drinking water. Although no one seems to bat an eyelid about these things, they are serious issues.

Along with that, there are other problems too which similar to the issue we faced with Notre Dame. Other historical landmarks are being destroyed across the globe too. Indigenous land is being dug up and desecrated to build pipelines. Important historical sites have been bombed and desecrated.

The fire at Notre Dame, although devastating, is just one piece in a much larger puzzle of global destruction. This is not something new. Important and sacred places have been destroyed either intentionally or accidentally for centuries.

When it comes to all the other tragedies in the world, no one seems to do anything besides sending “thoughts and prayers.” However, the fire at Notre Dame Cathedral is one of the first times that we see people taking action. Mainly, people have been donating to restore it to its former glory.

In only 24 hours, around €880 million, almost €1 billion, was donated to the cause. The majority of that money was raised by billionaires who own companies such as Gucci and Louis Vuitton.

What About the Rest of the World?

Up until now, we’ve all thought that solving the world’s problems was out of our reach. After all, it’s hard for the average person to understand how much money billionaires and multi-millionaires have at their disposal. Because of that, we’ve ended up believing that it’s nearly impossible to solve the water crisis in Flint or to help the people of Puerto Rico rebuild after the hurricane they endured over a year ago.

Now, however, we’re starting to get an idea of how easy it could be to fix the world. The richest of the rich have enough money to donate to whatever cause they want, but only if they care. Sadly, most of them just don’t care enough.

The world should rejoice that we won’t yet be losing the beautiful cathedral that is Notre Dame. Despite that, we should take this event as an important lesson. If we can fix this cathedral after a disastrous fire, why can’t we fix the rest of the world? If the wealthy could donate as much to other causes as they have to this one, perhaps we’d all be living in a much happier world.

What do you think about the donations made to restore Notre Dame? Share this article with your friends and find out their opinions too.