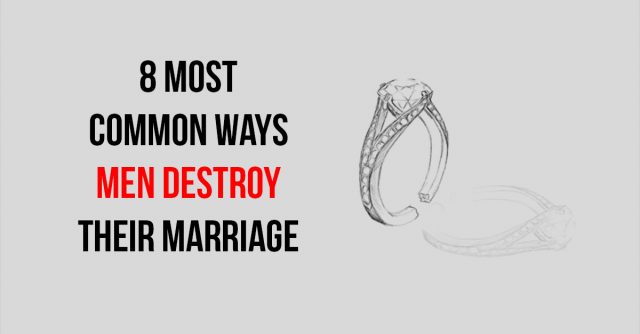 Some men never grow up. They never learn what true commitment means, and they never learn how to put love into action. And this mindset is something which can destroy even the most beautiful of relationships and marriages.

Living together with another person and sharing the responsibilities, while acting out of empathy and understanding, is a challenge which not many men are capable of grasping in their minds, let alone take it and go with it.

Here are the most common things men do that destroy their marriage.

1. Not wanting to fully commit to the responsibilities marriage brings

Being in a relationship where you both live in your own separate places and having fun is great. But once you get together and start building a home, this relaxed and careless attitude will become the main obstacle to healthy commitment.

There are so many men who think that being in a relationship and being married and living in the same house are the same thing. Well, while the love and affection should remain the same, the responsibilities are much, much bigger.

And not committing to the responsibility of building a home is something which will backlash sooner than you can expect. One can endure just so much.

2. Not caring about what makes your woman insecure

Some men like to take comfort to a whole new level, forgetting that their actions may, in fact, cause such insecurities in their women that they might even end up losing them. Looking at other women out of fun, mentioning how that other girl is hot, and other similar bulls**t are a real turn-off – and in the worst way.

Others like to do the same to trigger some jealous reactions and thus feed their ego. But whatever the case, it’s an awful thing to do to your partner, and one which will definitely leave a lasting negative effect on the relationship. 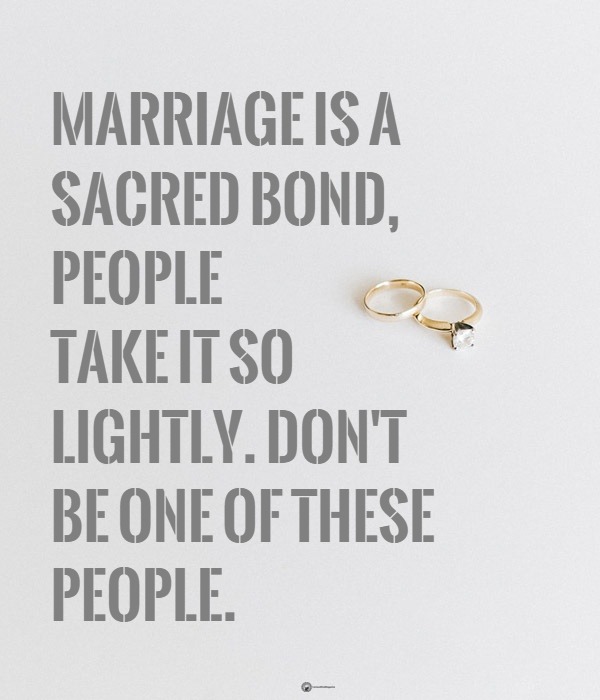 3. Underestimating the importance of small gestures

It’s got to do with getting too comfortable – again. The man simply forgets that these small acts of love are necessary regardless of what stage the relationship is, and he ends up being the totally inconsiderate cold stone.

There are things that never lose their charm, and these are the small things – the little acts that say so much about how much you love her really. And don’t think that you can get away so easily now that you’re married. That doesn’t change much in this regard.

4. Not including your woman in your struggles

It’s the considerate thing to do, you’d think, not putting your wife through your struggles. While men consider this as sparing their women from their struggles, in the woman’s eyes it’s equal to underestimating their role as partners.

And it’s a serious thing when you think of it. You’re not just sweethearts – you’re partners in the battle called life, so you should at least share your struggles and ask for advice if not else.

Otherwise, you’ll leave her with the feeling that she’s not competent enough and that she isn’t fully included in your life – which is very harmful to happen.

5. Not taking responsibility for your actions

When it comes to childish behaviors, the worst would be trying to blame the world for the things you’re responsible for and blaming others (especially your wife) for your deficiencies.

Feeling like your pride is hurt is one thing but putting your wife through hell just because you feel smaller is something that is simply stupid. “She doesn’t care for me, that’s why I had an affair” is simply the worst and dumbest excuse one can make!

If you’ve done something wrong, man up and set things right! If she’s mad at you, don’t feel like she’s your mother who should simply get over it and forgive it without you making proper amends. If you accept your problems and if you accept your role in them, you can easily avoid this kind of childish behavior.

6. Giving her the silent treatment

Every relationship has its challenges and can lead to lowered self-esteem, hurt emotions, and even broken ideals. And the worst thing to do is pushing these emotions down and becoming distant and unresponsive.

Communication is key in every relationship and discussing these issues together and trying to find a solution (even argue if needed) is better than letting these negative emotions define your inner self.

Creating emotional distance and an essential lack of communication on the issues that can destroy your relationship means destroying it with every passing minute. In the end, you get a dysfunctional environment in which neither of you wants to be present.

7. Being judgmental and trying to fix her

First, you can’t ‘fix’ anyone – and furthermore, you can’t judge anyone. You should accept that we all have a dark side and that it’s only natural for this side to surface once you both create some comfort with each other.

This side, however, is not something you should judge and try to fix all the time, as you’re not much better yourself (even if you see yourself better in those aspects, you are worse in others for sure).

Marriage is about compromise and trying to find common grounds on which you can both work together, inspire each other, and grow. You can’t force change – but never underestimate the power of planting a seed.

You are not perfect – that’s final. So why think that you can get away without saying ‘sorry’ whenever you do something stupid or foolish? You’d like to hear an apology and see how she’s trying to make up for the things that you may not have liked, so why do you think that it doesn’t the other way around as well?