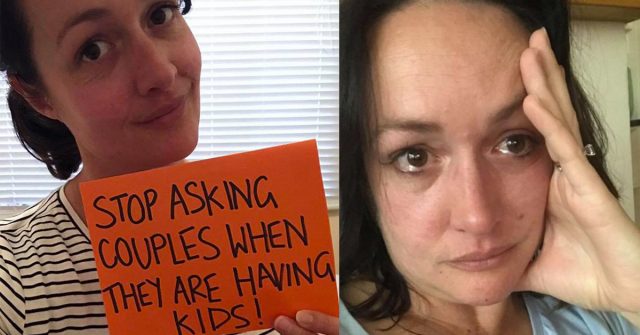 Maybe you feel ready about finally having kids or maybe parenthood is one of the best things that ever happened to you, so you think that everyone should be excited about it. Maybe you cannot wait to have grandchildren so you can spoil them and teach them all about life.

Whatever it is, you have to stop it right away.

Because guess what? It is none of your fricking business.

I cannot count how many times I’ve talked about this topic with people. Anyone I know who is of child-bearing age or just got married, including me (I just moved in with my boyfriend) gets this uncomfortable question on a daily basis. And what makes it even more tragical, it is often asked by people who shouldn’t even be concerned with our lives.

Oh, and if you think that all of this stops after the first child arrives, you are mistaken. It gets even worse. People aren’t satisfied with you having one child. They simply must know why you aren’t having another. Or at least, when you are planning to have another…

Let me ask you something.

First of all, let’s get one thing straight. Unless the person that you are talking to has specifically spoken about this subject with you and let you know about their opinion on having children, it is absolutely presumptuous to assume that they even want to have children. You have no right to invade someone’s privacy like that and expect them to give you the answer to your ignorant, inconsiderate and rude question.

Just because you like to have kids/ have kids, it doesn’t mean that every person out there should want the same out of life. Having kids is a very personal choice, not a necessary step. Get that in your head and stop making people uncomfortable.

Second of all, you may not be aware, but your questions can cause great pain to someone who has difficulties getting pregnant or staying pregnant. Statistics show that miscarriage rates are all high. According to analysis, approximately 15-25% of known pregnancies end in miscarriage and 1 in 4 women experience this at least once in her lifetime.

My point is, most of the time, you won’t have any idea what the person next to you is going through or has gone through. Even though their response may be “Oh, we are not in a hurry”, the reality might be completely different. That is why it is really important that you learn to respect people’s privacy and their different life choices.

Quit imposing your beliefs on others and stop asking couples why they aren’t having children. It’s rude!