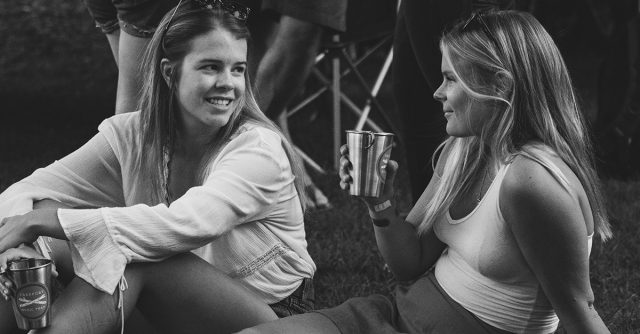 Ever walked into a crowded birthday or cocktail party and all you heard was: “What do you do?” “Did you watch the football match last night?” “Oh, the weather is terrible today.” Blah, blah, blah. There’s nothing more boring than this, right?

Ever since I was little I have always wondered why people start every conversation with predictable and exhausting questions like these? Okay, I know many will say they do that when they want to get someone’s attention or to avoid awkward situations. And yeah, you’ll attract their attention, but you certainly won’t keep it because trivial chit-chat doesn’t evolve into a meaningful or interesting conversation.

It turns out that the types of conversations you’re having are important for your well-being. Researchers at the University of Arizona and Washington University in St. Louis investigated whether there are differences in the amount of superficial talk and meaningful conversations between happy and unhappy people.

Researchers used recording devices to track the conversations of 79 undergraduate students for 4 days. Then, they identified whether the participants engaged in small, uninvolved, banal talks or in substantive conversations in which meaningful information was exchanged.

Doing trivial chit-chat with people you meet for the first time or with old acquaintances can be quite boring and exhausting. And because of this, many parties banning small-talk are sprouting up across the globe.

The inspiration in a lot of cases appears to be an article published in Wired in 2016, in which behavioral scientists Dan Ariely and Kristen Berman wrote about a dinner party they hosted in this fashion. Small talk was forbidden and the guests were given index cards with examples of meaningful conversation starters.

The party turned out to be a hit. The authors said “everyone was happy” without the obligation to engage in banal talks, such as the latest sports game or the weather.

Then, Carolina Gawroński, founder of the No Small Talk dinner experiences, launched her business in Hong Kong in December 2017, and it is quickly expanding in Europe and the USA.

No Small Talk is a platform for open-minded and exciting conversations held at dinners around the world. The guests are forbidden to have trivial chit-chats and they’re given cards with meaningful-conversation prompts.

Next, Sean Bisceglia, a founder and president of one Chicago software company, has also hosted Jefferson-style dinners for the past 10 years, in which the main rule is – you guessed it – no small talk. A group gathers over a meal to have a whole-table conversation with a purpose and only one person speaks at a time.

Bisceglia said: “I do it because the shallowness of cocktail chitchat kind of drove me crazy. There was never any conversation deeper than two minutes. I really felt that if we could bring together a group of people, you could get into the issues and hear different people’s perspectives.”

So, if you liked this idea of banning the small talk, and you want to have meaningful, interesting and captivating conversations, and attract anyone’s attention, here are 11 refreshing questions that will help you do that.

3. In your view, what’s the most important thing I should know about you?

4. If you could do anything you wanted tonight (for any amount of money and wherever you wanted), what would you do and why?

5. When and where were you happiest?

6. If you had the chance to meet one person you have never met (be that your favorite singer, actor, writer, politician, sportsman, you name it), who would it be, why and what would you talk about?

7. What are the 3 most defining moments in your life?

8. What was your dream job growing up?

9. What book has had the greatest influence on you?

10. What’s your favorite guilty pleasure and why?

11. Imagine you’re going to spend one week on a deserted island, and you can only take three things. What would they be?