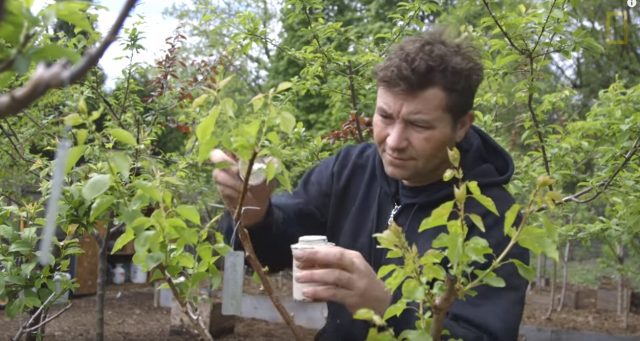 Imagine having your own garden full of apricot, plum, peach, cherry, apple, almond trees.  Imagine going out in the morning and making yourself a fruit salad from all the fruits that you can gather. Pretty awesome, right? Personally, I’d do anything to live in that kind of paradise.

Now imagine having that same garden but instead of 40 different fruit trees, you have one magical tree that successfully grows more than 40 different types of fruits. Sounds amazing but definitely unreal, right?

For you maybe, but not for this man!

Sam Van Aken, is an artist and professor at Syracuse University who wanted to explore nature in a more inconvenient way, so he challenged himself to create a single fruit tree that produces many more fruits than just one.

His idea came from a fascination with the process of grafting that he was first introduced with as a child. Back then, he likened it to Dr. Seuss and Frankenstein. But what started out a simple child’s fascination eventually became a reality, only in his reality, Sam never did seek to create a monster, but an extraordinary piece of art.

When he first started his experiment, a lot of growers that he worked with were confused by his idea. At first, he says “The didn’t understand it because they were Why would you want to have a tree with that many different fruits on it?” But to him, this project was more than just growing a tree. It was an art project. Sam’s initial idea was to plant these unique trees in public locations in order to confuse people and make them wonder.

His extraordinary creations are a result of an ancient grafting technique. If you don’t know what grafting is, it is a horticultural process of saving old, dying trees by attaching new branches onto them which will eventually allow the tree to grow as a single plant.

The key is in tricking the tree by placing various branches from other fruit trees, tying them together with clear plastic tape. This tape is supposed to create a greenhouse around the graft by producing enough humidity to make the grafts heal in nicely. But the results don’t happen overnight. According to Sam, this is a long process that takes about 8 or 9 years.

It took him years of diagramming, experimenting, analyzing and planning to sculpt the trees so they can continually blossom more than just one month. But he did it. His trees grow more unique and diverse in color and fruit every year. The first one was planted in 2012 and according to him, it will be in full blossom in about 3 or 4 years.

Still, the thing that has left me in awe is the fact that this tree does not only looks extraordinary, but it can truly help us in reducing world famine since it can be planted anywhere.

Just imagine how much our planet would benefit if we had a few of these trees planted in our neighborhood!

Below is the interview that National Geographic did with Sam Van Aken. If you are interested in learning more about the process of creating these magical trees, don’t hessite to press play.