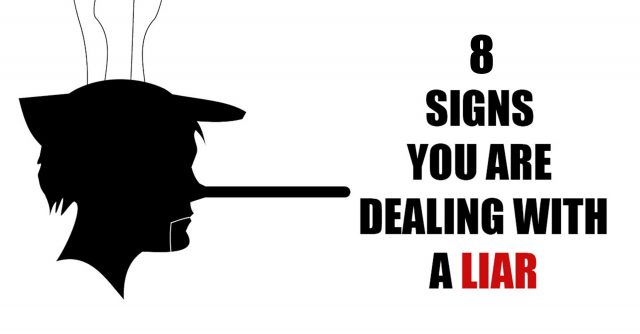 In this twisted place of a world, you’ll eventually come across all types of situations. And sometimes in order to get the ball in your court, you’ll ultimately help yourself with a lie.

You’ll sugarcoat the truth and you’ll manipulate your way out. And on some occasions, that’s okay.

I mean, a white helpful lie here and there is nothing to be alarmed about. In fact, we all lie, whether if that helps us or it’ll help someone else, we do it.

However, there’s a fine line between an occasional innocent lie and making it your full-time hobby. Some people sink way too deep in their own lies that they end up believing in them.

But it’s really not that hard noticing someone’s false behavior. It’ll all turn up eventually.

You just need to acquire some basic body-language knowledge and carefully follow their actions.

Here are some useful pointers that can undoubtedly reveal to you if the person you’re dealing with is indeed a filthy liar:

1. They are always nervous around you

An amateur liar is bound to attract some certain attention to them. It’s most likely you’ll notice their deceitful behavior by their occasional anxiety attacks whenever they’re around you. They might start to talk faster and uncoordinatedly, while intensely sweating and blushing.

Liars are living a perplexed, fabricated life. So, it is no wonder, their stories usually don’t add up. They’ve created so many versions of what actually happened, and they shift their fake realities from one person to another. Whatever they feel is most convenient.

So, naturally, you notice there are always parts that seem to miss in that whole made-up tale.

3. They get defensive whenever you ask something

When a person is clean and has nothing to hide, when being questioned, they’ll offer a logical and supported explanation.

However, when a liar is being put under “interrogation” it is most likely they’ll struggle and fight to prove the opposite just, so they can avoid caving and revealing the awful truth.

Compulsive liars will refuse to accept your claims, they’ll go on the defensive by showing signs of anger, crossing their arms (the surest sign a person isn’t straightforward with you) and provoking a conversation about you so they can stop you from going further.

4. They tend to change the subject

And if by any chance someone mentions a subject that’s close to their lies, they immediately change the subject.

Sometimes you won’t even notice it, and they’ll shift the topic to something totally non-related just, so they can get out of the potential mess.

Watch out from people who are more likely to change a certain subject rather than answering your question sincerely.

Another sign that I’m sure you’ve noticed is that liars tend to move more awkward and fidget a lot. It is a sign that they’re nervous around you and they’ll use any distraction to escape reality.

This usually results in tapping with their feet, twirling their hair, nail tapping or frequently checking their phones.

6. They start babbling uncontrollably to cover their insecurity

And in order to justify their actions, they’ll tell you a bunch of white lies which are later topped with more lies just to keep the storyline flowing, when in reality it doesn’t make any sense at all.

Their stories are usually tangled up with made-up facts, which is no wonder they get detected so often.

7. They often change their story…

With an excuse that they forgot to tell you the first time. You often catch them sweating over something that some of their companions recklessly mentioned in front of you. And you realize that it was a piece of information that they were lying you about.

So, they choose the low road and feed you their deceitful, trumped-up story, which of course it is always in their favor.

8. They refuse to make an eye-contact during a conversation

To me, eye-contact is a first, telltale sign that a person is paying attention to you while you speak and more importantly they’re being sincere with you.

That is why, liars, also recognized for their back-stabbing nature, and owning zero credibility whatsoever, have no courage to look you in the eyes and speak to you.

Most of them feel like you could see right through their soul and their falseness. So, they’ll avoid gazing into your eyes. However, some of these people have gone through a lifetime lying course and they’ve become the pathological masters of not telling the truth and getting away with it anyway.

Be careful around these people. Because with them, you won’t be able to tell when they’re being untruthful. They’ve gained the perfect knowledge on how to fake honesty and make themselves seem more appealing to you.