It’s interesting how nowadays the word psycho is usually thrown around loosely and used to describe an irrational behavior, something that is out of the ordinary and makes no sense.

When in reality, we forget that there are actual people who fall into this category and meet the clinical standards for psychopathy. In fact, the definition of psychopathy according to American Psychiatric Association is:

“(A) pervasive pattern or disregard for, and violation of, the rights of others that begins in childhood or early adolescence and continues into adulthood.”

Professor Robert Hare, who is a career criminal psychologist, and creator of the ‘PCL-R’ assessment – a diagnostic criterion of psychopathy stated:

“It stuns me, as much as it did when I started 40 years ago, that it is possible to have people who are so emotionally disconnected that they can function as if other people are objects to be manipulated and destroyed without any concern.”

I personally believe that what’s even more horrifying and dangerous about this is the possibility of ending up in an intimate relationship with a psychopath.

For that reason, here are 8 behaviors psychopaths tend to manifest that will eventually reveal their true identity. You’ve been warned!

No self-control combined with anger, frustration, insecurities and a lack of emotional awareness usually results in dangerous and violent behaviors. Most psychopaths tend to attack verbally, while there are also some who have absolutely no problem physically harming another human being.

And when I say thrill seeking, I’m not talking about a craving for adrenaline like a skydiver would do. I’m thinking twisted and perverted desires for odd and dangerous experiences.

Taking the risk of harming themselves, breaking the law and justifying the meaning of the word psycho. 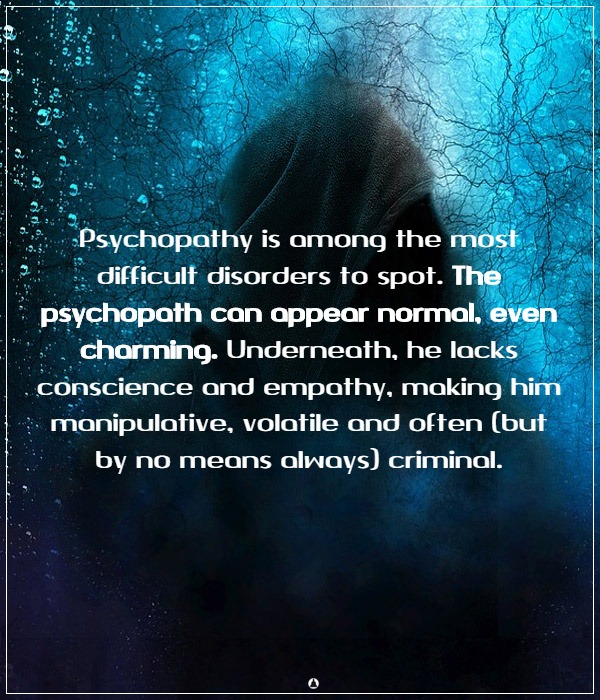 I believe that this is something that is already familiar for most of the people out there. Psychopaths and emotional vultures have no inner compass that has the power to make them see the difference between right or wrong.

These people have no problem manipulating or deceiving another human being to fulfill their wishes and sickest desires.

Psychopaths tend to lack a genuine emotion. They’ve found it easier to operate with their familiar side of the spectrum. The darker one. The one where jealousy, anger, resentment, rage, and depression reside.

Unless they need to trick someone into doing them a favor. Then they know exactly how to fake that genuine emotion you’ve spent a lifetime desperately searching for.

You know what they say… The devil comes disused as everything you’ve ever wanted.

Most importantly a psychopath tends to engage in meaningless and shallow relationships due to their lack of empathy.

A study published in the journal Frontiers in Human Neuroscience examined the brain images of 121 incarcerated inmates including individuals who were classified as highly-psychotic.

The research showed that individuals suffering from psychopathy failed to show neural networks that lead to empathic concern.

7. NO SENSE OF RESPONSIBILITY

Psychopaths have no sense of responsibility. They prefer to put the blame on somebody else instead. They will accuse you of things you haven’t even thought of doing and they will make you wish you were never born.

8. AN INFLATED SENSE OF SELF

One word. Entitlement. They have an extremely high sense of self-importance. They believe this world belongs to them and they are the only people who need to be in the center of the attention.

Psychopaths possess an arrogant, narcissistic and selfish personality. These traits go perfectly well with their inflated sense of self.