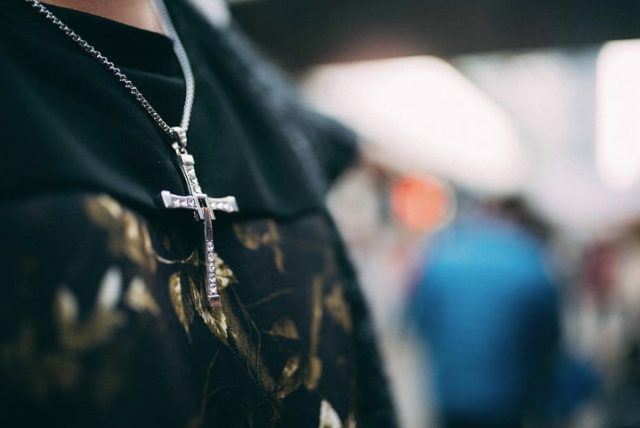 There are around 2.3 billion Christians in the world, a number that has increased steadily over the last century.

With a number of this size, there is naturally some divergence in terms of accepted practices. Different churches and areas have different ideas about the most appropriate interpretations of the word of Our Lord.

One point of contention is the wearing of crosses as jewelry. Believers are divided on whether this is an acceptable way to give praise to God.

So, is wearing a cross an acceptable thing for a Christian to do? Read on as we explore this question in greater detail.

The Importance of the Cross

As every Christian knows, the cross is the central symbol of our faith. As the instrument used to torture and kill Our Lord and Savior Jesus Christ, it symbolizes the burden He took on to cleanse us of our sin and bring us to everlasting life.

Such use of the cross is widely accepted as a valid way to give praise. This article looks at whether the use of the cross as a bodily adornment is also acceptable. As you will see, this kind of use has drawn criticism from certain quarters for various reasons.

The Arguments Against Wearing a Cross

The arguments against wearing a cross vary widely. The acceptance (or lack thereof) of the practice varies significantly from church to church.

Many churches don’t take an official stance on the matter, and prefer to allow individual ministers to advise their flock as they see fit.

Some of the main objections are explained below.

If you construe it as being synonymous with, or a specific form of, pride, vanity is one of the seven deadly sins.

Many Christians look upon jewelry as feeding into the vanity of those who wear it. Therefore, to use a cross as a piece of jewelry is to use this symbol of faith as a monument to your vanity, in this view.

The Bible warns against the prioritization of outward show at the expense of inner qualities. Some people argue that jewelry has no value other than outward show, and that jewelry based on the cross is therefore unacceptable.

The Third Commandment states that no one should invoke the Lord’s name, titles, attributes, or works other than in a reverential fashion.

Many commentators have proposed that improper wearing of the cross could be contrary to this Commandment.

Many people wear crosses as a “lucky charm” of sorts, hoping that it will bring them good luck or ward off ill fortune.

While this may be done in good faith, it is at odds with Christian teaching. The Bible forbids the worship of any false idol or figure in place of the one true God.

When people wear the cross in the hope that it will bring them good fortune, they are misunderstanding its purpose. The reason for the use of crosses is the worship of God and the expression of solidarity with other members of the Christian community.

It is only through a loving and sincere relationship with God that we can expect to find favor with Him. The wearing of a cross alone will not confer any such benefit.

The belief that it can or would is more consistent with historic pagan traditions than modern Christianity.

The Arguments in Favor of Wearing a Cross

While there are objections to wearing a cross as jewelry or another form of adornment, many Christians feel that it is a respectful and important means of giving praise.

Some of the main defenses of the practice are listed here.

Celebration of Our Faith

The cross is used in many different contexts as a mark of respect and reverence for the sacrifice made by Jesus Christ for our salvation. Those who defend the practice of wearing crosses as jewelry claim that this is no different than the use of the cross in any other context.

Another defense of the practice of wearing crosses is the idea that it can spread the good Word of God, especially to those who may not have been exposed to it previously.

Proponents of this idea also point out that it allows Christians to be more open with their faith in areas that may not be friendly towards Christianity. When one Christian sees another sporting a cross, he or she may be more inclined to openly practice their faith in spite of the possibility of disapproval.

Should I Wear a Cross?

Ultimately, the wearing of crosses is a matter of personal preference. If your church accepts the practice, and you feel that your way of wearing it is a respectful gesture of your faith in God, you should continue to do so.

There are a number of different ways to wear a cross if you choose to do so. You can wear a necklace, a religious bracelet, rings, earrings; the list goes on.

Of course, the appearance of the cross in your piece of jewelry is highly relevant. A small, simple, understated piece is more likely to be acceptable than an audacious piece adorned with multiple jewels or precious metals.

Whatever way you choose to wear your cross, the important thing is that you do so respectfully.

If the purpose of it is to give praise to God and to spread the message of the gospel, rather than to call attention to your piousness for reasons of vanity, you should feel no hesitation.

Different Uses of the Cross

Many stylistic variants of the cross can be seen in Christian cultures worldwide.

One that is common to all Christian cultures is something that we do every day, perhaps several times. When we bless ourselves, giving praise to the Father, the Son, and the Holy Spirit, we make the “sign of the cross.” As we say the prayer, our hands travel across our body in the shape of the cross.

Many churches are constructed in the shape of a cross. In such buildings, the altar sits at the intersection of the two limbs, with the congregation arranged along the long vertical limb.

The most widely recognized use of the cross is in iconography, such as in statues and pictures. The cross will sometimes appear with a picture or model of Jesus during his crucifixion, while others show just the cross itself.

The style of the cross varies considerably across cultures.

The Maltese Cross, for example, is symmetrical. The limbs of the cross are V-shaped and get wider as they move away from the center.

The use of this style of cross in jewelry, such as necklaces and brooches, is common in Malta, and indeed in Europe generally. The Order of Malta also use this cross as their symbol, and it also appears on the back of euro coins minted in Malta.

The Celtic Cross, which features a circle around the two limbs of the cross, is popular in Ireland. Irish Catholics use it on their gravestones, as well as in jewelry, clothing, and even tattoos.

Thematic Importance of the Cross

The basic importance of the cross is obvious. As the means used to kill Jesus, it gave Him the opportunity to rise from the dead on Easter Sunday, promising salvation to all those who followed in his path.

However, there is more to the use of the symbol that that. There are a number of diverse reasons why the symbol is used so much.

Important thematic uses of the cross include:

The cross is the punishment that Jesus volunteered for in order to save his people. This sacrifice comes from a place of tremendous love, which the cross symbolizes for Christians today.

The Importance of Suffering

The cross serves to remind Christians that suffering is a necessary part of life, and that through love and praise for Our Lord, you can transcend it in the afterlife.

One of the most important themes of the cross is the idea of everlasting life. Jesus arose from the dead on Easter Sunday; his cross is a reminder that all Christians can do the same if they live a good life in God.

Wearing a cross is ultimately a personal choice. There is room in modern Christianity for differences of opinion as to how best to show our love for God.

If you enjoyed this article, please have a look at some of our others. We post regular content on everything to do with family life in the context of Christianity.